Shower screens can transform any bathroom into a stylish, sophisticated area, just like the rest of your home. The entry of shower screens into the residential construction industry has seen a large number of homeowners forget about traditional bathroom curtains, and for a good reason.

Once you decide that a shower screen is right for your residential bathroom, here are a few things you should know before you set out in search of shower screen suppliers.

The Types of Shower Screens

There is, therefore, no need for additional door clearance. Quadrant screens are also referred to as corner shower screens because they are specially designed for installation in one corner of the bathroom.

Your choice of shower screen will depend largely on functionality and personal preference.

Frame or No Frame

The different types of shower screens can further be divided into three categories, depending on the type of frame that the door has.

Shower screens that feature a full frame have their glass panels fully surrounded by a metallic frame (usually aluminium).

The second category is made up of semi-frameless shower screens. These use an external frame that extends neither to the shower screen door nor to the sides of the glass panels from which the screen is made.

The third category consists of shower screens that are frameless. These are usually the most expensive of the three categories, thanks to the higher visual appeal they have.

While this might not be a legal requirement with the other types of shower screens, waterproofing will save your bathroom floors from premature damage, seeing as the floor is constantly exposed to water. 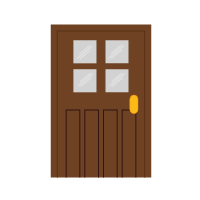 Renovating the doors in your home can bring a number of advantages. Doors do take up a large amount of space and they need a lot of maintenance but by learning a few things about how to care for them, you can make sure that each door becomes an asset. No matter what budget you have, there are ways you can make the most out of your doors. Our team of amateur door enthusiast have spent many hours researching this subject so they can bring you all of their top tips and best advice. Read on to find out more!

Automatic roller doors are a great addition to the …

Read More
Why Should Business Owners Get Security Doors?
18 March 2020

All people who run businesses from their own premi …

Installing an aluminium door can be a challenging …

You are probably excited by the prospect of instal …

Read More
What Should You Consider When Purchasing a Security Door?
25 February 2020

A security door is an important addition to your h …